The November issue of Lighting Design + Application has a full page profile of three lighting educators at New York School of Interior Design – Shaun Fillion, Nathalie Faubert, and me. Take a look.

Tony Esposito and I gave four presentations of Designing with TM-30 at this year’s ArchLIGHT Summit.  It was video taped and is now available on Vimeo.  Watch it here.

Update:  One of the attendees sent the following feedback to ArchLIGHT Summit.  “The TM-30 presentation was phenomenal. One of the best lighting presentations that I’ve ever seen. Great work.”

Next month I’ll be at ArchLIGHT Summit in Dallas.  Together with my IES Color Committee co-chair Tony Esposito, we’ll be giving several presentations on how designers can make better use of TM-30 by integrating it into their workflow.  In anticipation of our ArchLIGHT Summit presentation we were interviewed on Get A Grip On Lighting, where we talked about TM-30, color perception, and color rendering, among other things.  You can watch the interview on their web site, or below.

On February 24th I’m giving an online presentation called Designers Thinking About Light to the Vancouver section of the IES.  I’ll be talking about how lighting designers think about light as an artistic medium.  The presentation will include some ideas you probably know, as well as some approaches that will be new.  To register, visit the IES Vancouver Section web site.

I tell my students that we’re lighting designers not scientists, but that it’s good to understand some of the science that underpins our work.  This is especially true when the science is out of date and produces results that don’t necessarily agree with our vision and/or perception.  It’s frustrating and amazing to me that as individuals we’d never agree to use a broadcast only TV and give up our modern cable and internet channels. We’d never agree to use a flip phone and miss out on all of the upgrades and improvements that have been developed over the years. Yet as an industry we seem perfectly happy to continue to use 75+ year old technology with known flaws when we calculate color rendering, measure brightness, plot chromaticity in color spaces, etc.  Our industry doesn’t seem interested in “upgrading” to get the latest features like less metameric mismatch and measurements that better align with our vision and perception. But, I continue to shout into the void about these things. 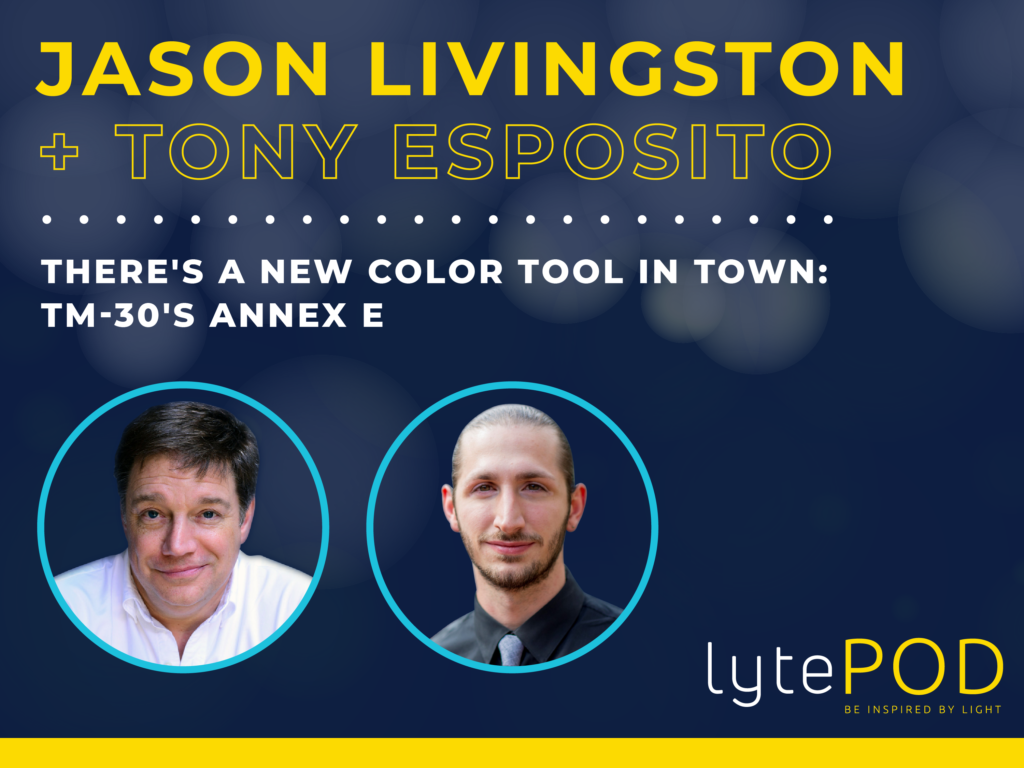 In September at ArchLIGHT Summit, Tony Esposito and I gave a series of demonstrations on the spectral flexibility of LEDs and the possibilities they present with regard to color rendering.  While there we spoke to Sam Koerbel on his LytePod podcast about the basics of the new measures introduced in Annex E, and discuss why TM-30’s multi-dimensional approach to quantifying color preference is superior to the old-standby in the industry: CRI.  Our discussion is now available.  Give it a listen.

I’m excited to announce that the second edition of my book Designing with Light: The Art, Science, and Practice of Architectural Lighting Design is now available as both a soft back and ebook.  It can be purchased from Amazon, Barnes & Noble, Wiley, and many other retailers, and makes a terrific gift this holiday season.  Order yours today!

Last week Tony Esposito and I presented seminars at ArchLIGHT Summit in Dallas, TX. The topic was TM-30 and the deep information that it provides us about a light source’s spectrum and the resulting color rendering. CRI, of course, only evaluates fidelity – how close a light source matches its reference light source. But CRI penalizes all deviations and says nothing about the rendering of individual colors. Nor does it help us understand if the deviations from the reference are acceptable to viewers.

A small part of our demo is shown below. It illustrates how two light sources can have the same fidelity (in this case Rf of 70) but wildly different spectra that produce wildly different color rendering results. This is the great strength of TM-30, a deeper insight into the effect of a light source on illuminated objects and their color appearance – not just fidelity, but chroma shift, hue shift, and the perceptual implications of those shifts.

The video below shows the color appearance shifts. The graphic illustrates that even though the Rf is 70, the first light source renders objects in a preferred manner (Preference Priority Level of 3 or P3) and increases vividness (Vividness Priority Level of 2 or V2). At the same Rf the second source mutes colors and fails to achieve any of the Design Intents and Priority Levels specified in TM-30’s Annex E.

A reminder that Tony Esposito and I will be presenting Specifying Light Source Color Rendition three times at ArchLIGHT Summit in Dallas next Tuesday and Wednesday, the 21st and 22nd. Hope to see you there!

My colleague Tony Esposito and I will be giving a new TM-30 seminar and demonstration at ArchLIGHT Summit 2021 in Dallas on September 21st and 22nd. We’re working on a new, and we hope more attendee friendly, presentation and an all new set of demonstrations to explain TM-30s Annex E specifications. The demo will include, for the first time, live models of different ethnicities so attendees can evaluate the impact of of the specifications on skin tone. I hope to see you there!