As I posted in March, the Emerging Technologies Program of the DOE’s Building Technologies Office asked for pubic comments on extending the minimum efficacy of incandescent lamps used in general illumination applications, specifically:

On May 13th the IALD published their response. The broad outline of their comments are that, first, the proposed rule to increase efficacy to a minimum of 45 lm/W is almost irrelevant because “the market is already addressing the issue of energy savings from lighting.” They go on to note that according to a recent Commercial Buildings Energy Consumption Survey, the use of electricity for lighting fell by 46% between 2003 and 2012.   Second, there is little to be gained by requiring an increased efficacy for lamps that do not currently have a minimum due to the relatively low numbers of lamps involved. Third, the available technologies (primarily LEDs) do not adapt well to certain lamp types and exhibit a range of problems with dimming.

I support the IALD’s response. Quite frankly, with the low LPDs that are written into the various energy conservation codes, we’re already designing under very tight power budgets. The DOE’s proposal will have no effect on decreasing power consumption because it lags so far behind Standard 90.1 and the IECC.

The Emerging Technologies (ET) Program of the United States Department of Energy Building Technologies Office is seeking information from the public on incandescent lamps in general illumination applications.

The ET Program supports applied research and development for technologies and systems that contribute to reductions in building energy consumption and helps to enable cost-effective, energy-efficient technologies to be developed and introduced into the marketplace. The following are key areas of interest:

1. Incandescent lamps that currently do not have a suitable replacement lamp meeting or exceeding 45 lumens per watt (lm/W).
2. Gaps in technology that impede (or would likely impede) the design, development and future sale of greater than or equal to 45 lm/W replacement lighting products

On December 2nd the U.S. Department of Energy indued a final determination  concerning energy conservation standards for high intensity discharge lamps.  You can download a PDF of the document from the DOE’s web site.

The Department of Energy (DOE) has extended the comment period for proposed energy efficiency standards for general service lamps (GSLs) until February 23, 2015. Documents associated with this set of standards are Docket No. EERE-2013-BT-STD-0051. There is a link on that page to submit comments.

You may recall that the Energy Independence and Security Act of 2007 (EISA) set minimum efficiency standards for medium screw base (a.k.a. E26) general service lamps (a summary of requirements and exemptions is here). Those minimum standards were phased in by wattage and now cover GSLs from 40 to 100W. Decorative and other specialty lamps are excluded. A public meeting and webcast was held on January 20th to explain the new standards for consumer lamps. You can download a PDF of the presentation here. It’s a long presentation of 94 slides, so here’s a summary.

1.  The DOE is considering establishing standards for the following lamp types:

2.  The DOE is considering requiring the following lamps, which are currently exempted from EISA requirements, to comply with the new standards:

3.  The DOE is also considering not setting standards for certain lamp types for reasons that include:

There are over three dozen identified issues that are open for comment. These standards will have a far reaching effect, so I urge you to look over the presentation and submit comments.

On September 26, 2014 the U.S. Department of Energy issued a determination that ANSI/ASHRAE/IES Standard 90.1-2013 would achieve greater energy efficiency in buildings subject to the code than the 2010 version.  The DOE analyses determined that the energy savings would be:

As a result, all states are now required to certify that they have reviewed the provisions of their commercial building code regarding energy efficiency and, if necessary, updated their codes to meet or exceed the 2013 edition of Standard 90.1.   States must submit certification of compliance by September 26, 2016 or explain why they cannot comply.

Why is this happening?    The DOE is required by the Energy Conservation and Production Act (42 USC 6833) to review each new edition of ANSI/ASHRAE/IES Standard 90.1, and issue a determination as to whether the updated edition will improve energy efficiency in commercial buildings.  If the determination is that the new version will improve energy efficiency, that standard becomes the new nationwide minimum requirement.  States aren’t required to adopt Standard 90.1, but whatever standard they develop or adopt must be at least as stringent as Standard 90.1.

Some of the changes in the new standard are:

The DOE website contains additional information, including PDFs of the analyses they conducted.

On June 13, 2014 the U.S. Department of Energy (DOE)  suspended the L-Prize PAR38 Competition. The LED PAR38 products currently on the market fall far short of reaching the rigorous L -rize targets, making it unlikely the DOE will receive a qualifying entry in a reasonable amount of time. The DOE cannot lower the efficacy target because it was set by Congress. The DOE will continue to monitor the PAR38 market for performance and price improvements, to consider reopening the competition at a later date.  The graph below illustrates the market vs the L-Prize goals as of November 2013. 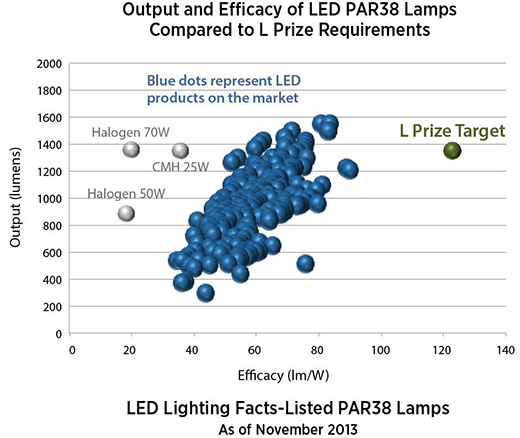 More information is available on the DOE web site.

Two frustrating items came across my desk this morning.  The first is an attempt by two Ohio state senators (both Republicans) to pass a law (SRC25) prohibiting the use of LEED in all Ohio state buildings, including schools.  This despite the fact that Ohio already has 100+ LEED school buildings that are saving  tax payers tens of thousands of dollars on energy bills every year.  What’s the rationale for the new bill?  You can read the full text here, but essentially it claims that LEED v4 “fails to conform to recognized voluntary standard development procedures.”

Why is LEED, the largest and most successful green program in the world, being singled out?  This is really just a smokescreen for an attempt to protect certain industries and manufacturers from divulging the contents of their building materials, which is new under LEED v4.  The reason favoring disclosure is simple.  Some building materials have chemical components that seep out of the product and into the indoor environment, a process called off-gassing.  Without disclosure from manufacturers the architects and owners have no way of knowing what chemicals workers, students, patients, etc. are being exposed to.  With disclosure they can make better choices that minimize any possible effects on building occupants.  Some manufacturers have been very pro-active about reformulating their products to limit or eliminate off-gassing.  Apparently some have decided that ignorance (on the part of architects, owners, and occupants) is bliss (for the manufacturer).

The second news item concerns an amendment to a bill working its way through the U.S. Senate.  The Energy Savings and Industrial Competitive Act (ESICA), if passed, would be the first new energy efficiency related legislation passed in seven years.  The problem?  The “All-Of-The-Above Federal Building Energy Conservation Act of 2013” failed to pass last year, but is now part of ESICA.   It calls for the repeal of Section 433 of the Energy Independence and Security Act of 2007 (EISA), which mandates that the federal government eliminate fossil fuel-generated energy from new and renovated federal buildings by 2030. In other words, it would repeal the government’s commitment to the 2030 Challenge for carbon reduction.   The AIAs response can be found here.  Other organizations opposing the amendment include Architecture 2030 and the Natural Resources Defense Council.

Not surprisingly, the sponsors of the amendment are from states where fossil fuel production is a major industry.  It’s true that the U.S has enormous reserves of coal, oil, and natural gas that can supply our energy needs for many years to come.  It’s also true that we’re changing the global environment by burning these fuels.  We can decide to wait until our reserves are used up before we entertain making a change.  However, in doing so, we are also deciding to allow Germany, Japan, South Korea, China etc. to develop the technologies that will power the future.  Alternatively, we can decide to lead the energy revolution by developing the technologies, and the markets for them, here at home.  Contact your senator and let him/her know which path you’d prefer to take.